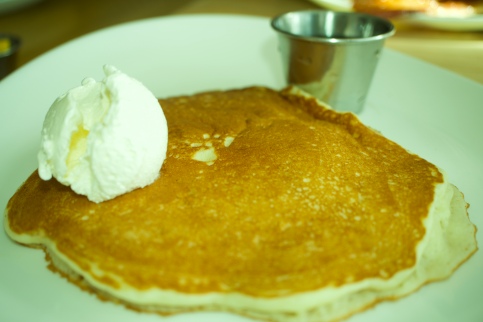 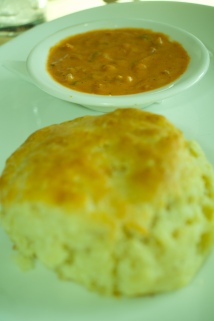 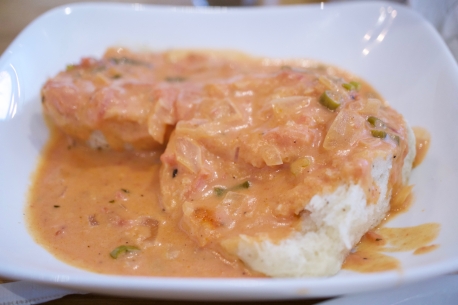 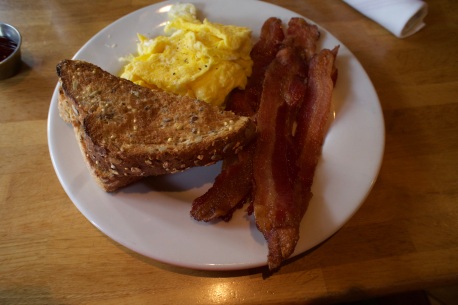 Big Bad Breakfast is located in Alabama, Mississippi, and now Florida.  I have only been to the location in Birmingham but they have the best biscuits in Alabama, and maybe the southeast.  The owner was over the biscuit challenge on Bravo’s “Top Chef” which speaks to the respect these biscuits are given.  I like that they have different gravies for the biscuits.  The gravy in the image is the tomato gravy and it is simply phenomenal.  The Chicken and Waffles are also very good.  I like that they have a vast menu from cheese grits to shrimp and grits.

While Big Bad Breakfast is very good I must admit that I do not like the French Toast, and  I pride myself in being a French Toast connoisseur.  I go here whenever I go to Birmingham, which is a few times a year and after the first time when I hated the French Toast I cannot eat it again.  I would also be remiss if I did not mention that my dad ordered two types of sausage and he hated them both.

I had to be honest in my assessment of the restaurant but even with the awful French Toast and sausage, it is still the best thing going in Birmingham. 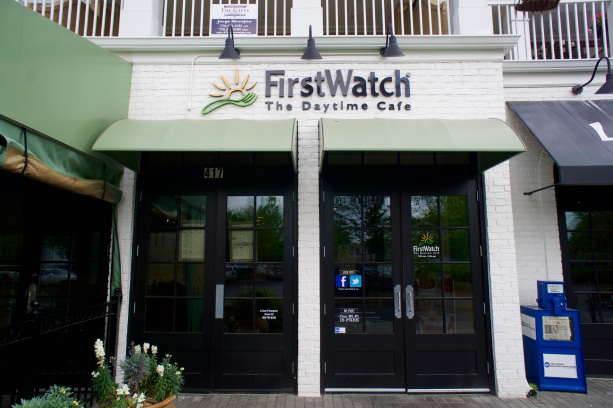 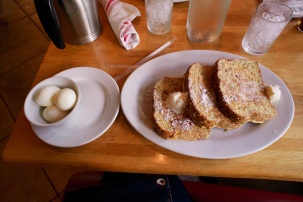 First Watch – Birmingham, AL; Atlanta, GA; and many other locations

This blog is not supposed to be about major food chains but this is a chain I love.  First Watch can be found in many locations in the Southeast and Midwest and they are all consistently good.  I love the French Toast.  The waffles are fantastic.  My husband orders the eggs, bacon, and potatoes.  Sometimes he gets the pancakes, and I eat some.  The food here is consistently good.  Since I do not have one in Chicago I make a point to go to the restaurant at least once whenever I am near one, mostly in Ohio and Alabama.

This is another chain, but it is a mini chain with a few locations in the United States.  The restaurant is a chain with the same items on the menu, however every location has local ingredients so the food does not taste the same.  The portion sizes are not the same, and the fruit is definitely not the same.  The food is very good.  The Orlando, FL location is the first one I visited and it was also the best one.  The food is HUGE.  The pancakes are the size of a small pizza (10″).  The Chicken and Waffles are made with a sweet potato waffle.  Since I am allergic to sweet potatoes they are also able to accommodate me with a vanilla waffle.  They have huge biscuits and these biscuits are totally different from location to location.  The ones in Orlando are very good.  They douse them with honey and they are very good.  Its a fun restaurant, with obnoxious portion sizes, but the food is good. 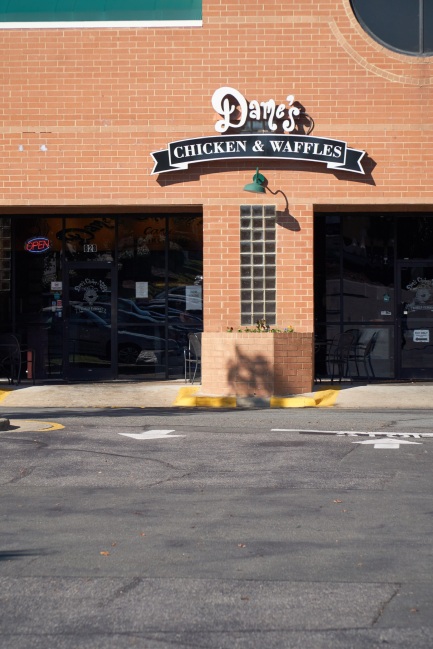 Dame’s Chicken and Waffles is a cute little restaurant in Cary, NC near Raleigh, NC.  The restaurant is the best in the southeast for me for one reason and one reason alone, the restaurant has a good vegan waffle.  The vegan waffle is so good that it is better than their other waffles.  The restaurant is known for what they call shmears, which are fruit based syrup like topping on the waffles.  I’m not that adventurous so I did not have a shmear.  However, I did have the chicken and waffles and collard greens.  The greens were not the best I’ve ever had so don’t go there for the greens but the waffles were delicious, maybe the second best in the southeast, not as good as the vegan waffle.  The chicken was good, the breast was a little dry, but otherwise it was a very good.  I hear the macaroni is fantastic as well.  I highly recommend this restaurant over any other in the southeast. 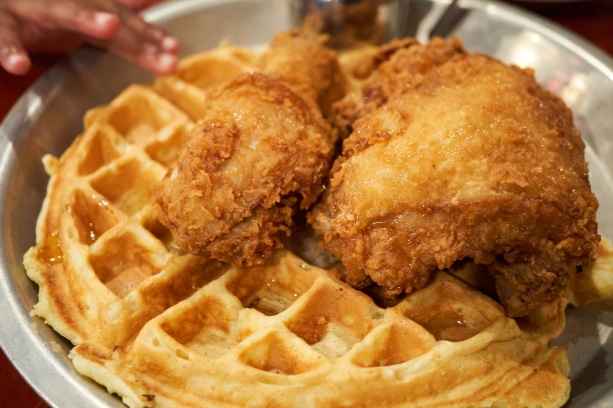 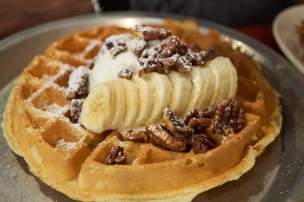 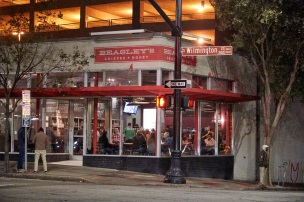 Beasley’s Chicken and Honey is a restaurant located in Downtown Raleigh, NC.  The restaurant is very good.  The waffle is fantastic, likely the best, dairy based, waffle in the southeast.  The chicken is cooked to perfection, and the biscuits are super flakey.  They serve all their chicken with honey drizzled on top and it is fantastic.  The honey is just enough to taste but not too much.  The waffle is moist and fluffy.  It is a great waffle.

I went back to get the chicken biscuit, which is served with a boneless chicken thigh.  The chicken thigh is big and makes it hard to eat but it is still amazing. There is likely nothing at this restaurant that tastes bad.  When I am back in Raleigh I will definitely return to Beasley’s Chicken and Honey. 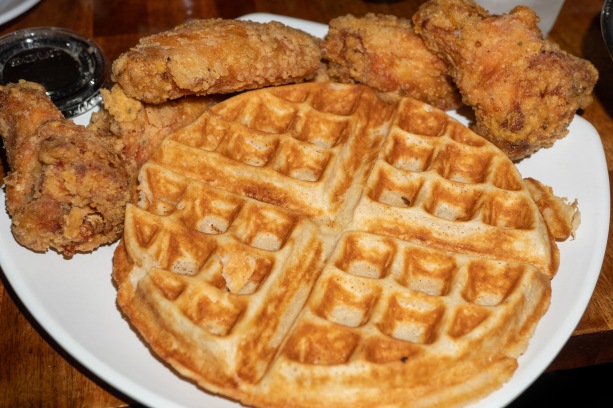 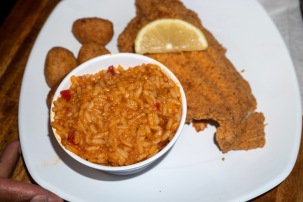 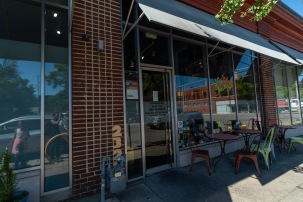 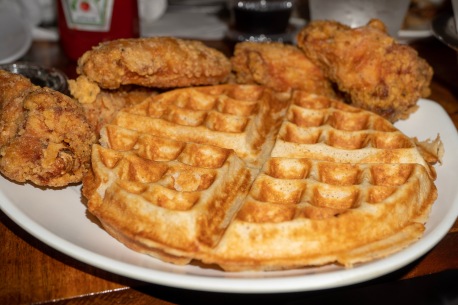